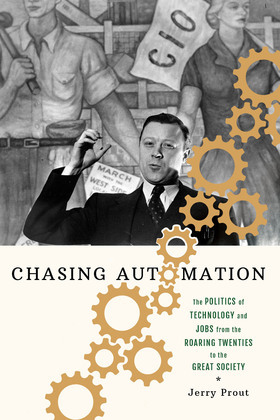 The Politics of Technology and Jobs from the Roaring Twenties to the Great Society
by Jerry Prout (Author)
Buy for $25.99 Excerpt
Nonfiction Business & economics Economic history Social science Political science History & theory Science and technics Technology & engineering Electronics Automation
warning_amber
One or more licenses for this book have been acquired by your organisation details

Chasing Automation tells the story of how a group of reform-minded politicians during the heyday of America's industrial prowess (1921–1966) sought to plan for the technological future. Beginning with Warren G. Harding and the Conference he convened in 1921, Jerry Prout looks at how the US political system confronted the unemployment caused by automation. Both liberals and conservatives spoke to the crucial role of technology in economic growth and the need to find work for the unemployed, and Prout shows how their disputes turned on the means of achieving these shared goals and the barriers that stood in the way.

This political history highlights the trajectories of two premier scientists of the period, Norbert Wiener and Vannevar Bush, who walked very different paths. Wiener began quietly developing his language of cybernetics in the 1920s though its effect would not be realized until the late 1940s. The more pragmatic Bush was tapped by FDR to organize the scientific community and his ultimate success—the Manhattan Project—is emblematic of the technological hubris of the era.

Chasing Automation shows that as American industrial productivity dramatically increased, the political system was at the mercy of the steady advance of job replacing technology. It was the sheer unpredictability of technological progress that ultimately posed the most formidable challenge. Reformers did not succeed in creating a federal planning agency, but they did create a enduring safety net of laws that workers continue to benefit from today as we face a new wave of automation and artificial intelligence.