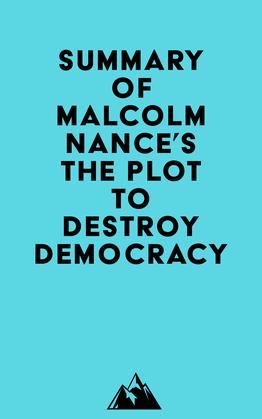 Summary of Malcolm Nance's The Plot to Destroy Democracy

#1 On November 8, 2016, Vladimir Putin became the first Russian President of the United States. What could arguably be called the greatest intelligence operation in the history of the world had been executed, and the result was that the candidate Moscow had supported had won. Putin didn’t care what happened next. He was certain that with Trump in power, American voters would be so enmeshed in chaos that they would be completely indifferent on how to respond.

#2 With the help of Americans who had turned on their own values, Putin was able to win. Trump’s supporters were happy to see him stand against virtually all gains America had made in equality and global economic expansion since 1964, as long as it got him elected.

#3 The plot to hack America, known as Operation GRIZZLEY STEPPE, was carried out in the summer of 2015. Russian Military Intelligence hackers gained access to the servers of the Democratic National Committee. They stole a single yet specific folder of opposition research on Trump.

#4 On July 22, 2016, WikiLeaks began releasing 19,252 emails stolen from the DNC. The materials appeared to focus on discussions designed to split the Democratic Party by revealing then chairperson Debbie Wasserman Schultz’s views on Bernie Sanders and Hillary Clinton.