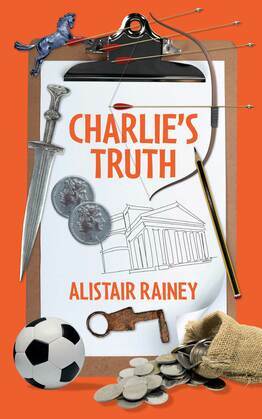 by Alistair Rainey (Author)
Buy for $14.99 Excerpt
Fiction Juvenile & young adult Action & adventure Historical Ancient civilizations Detective & thrillers
warning_amber
One or more licenses for this book have been acquired by your organisation details

When Wicton Village Museum and Library are to be developed, the mysterious curator, Miss Isadora Dean, is incensed. On a visit to the museum, Charlie and Saima, in Year 5 at the village school, are given a statue's head of Janus to draw but as they hold it they are thrust back to Wicton in Roman times.

Orcus, a cruel Roman tax collector, is involved in stealing thousands of denarii. Ruus, the son of the blacksmith Metallus, witnesses a fake ambush and murder, all part of an elaborate plot to steal thousands more. When the silver is stolen, it is buried in a clearing not far from town. Charlie, Saima and Ruus, not without some danger, unearth the bags.

However, all three children become embroiled and they themselves become suspects 'on the run'. Whilst Metallus is imprisoned at the fort, they are trapped by Orcus in the temple, yet notice another hoard within. Charlie, always full of ideas, sees a way to trap the real culprits and sets out his plan. They must use the Janus head and go back to the future then return to free Ruus.

Saima, truthful, stubborn and fast, runs to the fort to inform the authorities and just in the nick of time, soldiers arrive and arrest the true thieves. Charlie and Saima return to present day Wicton and when Alfie, a classmate, mentions a horse he had to draw carved on a brick from the temple, they set out on a treasure hunt. In the dead of night, they dig up a fortune at the museum building site but are immediately arrested.

Back at school, they are marched into assembly. They expect the worst until Mr Blewin, the developer, springs a pleasant surprise.