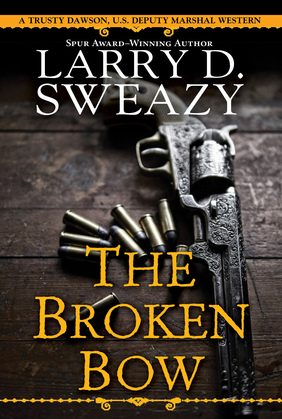 by Larry D. Sweazy (Author)
Buy for $8.54 Excerpt
Fiction Action & adventure Historical Westerns
warning_amber
One or more licenses for this book have been acquired by your organisation details

Targeted for vengeance, a lawman finds his face on a wanted poster—and facing every cutthroat gunslinger willing to put a bullet through his badge for the bounty in Spur Award-winning author Larry D. Sweazy’s action-packed western adventure.

Theodore Marberry is a grieving father. He groomed his daughter Jessica to take her rightful place among the wealthy families of St. Louis high society. Instead she married a common lawman whose tin star and sixgun made him worthy of her affection. She lost her life bringing his child into the world. Although bestowed with a beautiful granddaughter, Marberry is consumed with hate towards the baby’s father.

U.S. DeputyMarshal Sam “Trusty” Dawson lives under a death sentence. His only crime was falling in love with a woman who saw more worth in his character than in his bank account. Now, every deadly manhunter, desperate bushwacker, and vicious outlaw throughout the Dakota Territory is looking to put the lawman six feet under to collect $1,000 in silver. But there aren’t enough guns or bullets to stop Trusty from rescuing his daughter—and bringing Marberry to justice . . .

"Sonny is an engaging, determined hero drawing on his Texas Ranger experience to find some measure of justice. Sure to attract fans of Westerns.”
—Library Journal, STARRED REVIEW

“Sweazy shows marked skill at incorporating the sere landscape of north Texas, with its punishing sun and rattlesnakes creeping out of rabbit holes..”
—Kirkus Reviews