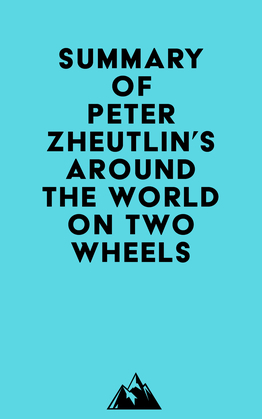 Summary of Peter Zheutlin's Around The World On Two Wheels

#1 On June 25, 1894, Annie Cohen Kopchovsky, a young woman from Boston, arrived in Boston to attempt something no woman had done before: an around-the-world bicycle trip. She was dressed in typical late Victorian attire.

#2 The bicycle trip was a novel wager between two wealthy Boston men to settle an argument about the equality of the sexes. The woman, Annie Cohen Kopchovsky, was required to earn $5,000 en route above her expenses.

#3 Annie was a Jewish woman who was married and had three children. She was a journalist, and she was prohibited from speaking any language other than English. She was extremely unlikely to be able to complete the challenge.

#4 The West End of Boston is where the city’s immigrant population lives. It is a tenement district, or in the newer phrase, the slums of Boston. The sound of horseshoes hitting cobblestone ricocheted through the streets, and the smell of ethnic foods wafted from downstairs shops and upstairs apartments.