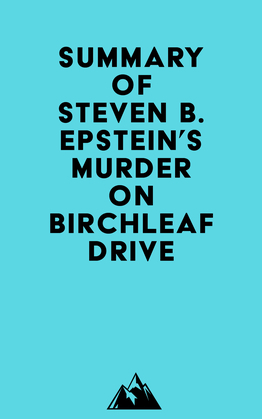 Summary of Steven B. Epstein's Murder on Birchleaf Drive

#1 In the four years she had known her sister, Michelle’s husband, Jason, had never called her twice in a week. On December 1, he had left a voicemail for her, asking her to call him back. He had heard Michelle telling her sister about the TV remote, and he vehemently denied her account.

#2 Jason asked his sister-in-law for a huge favor: to run by his and Michelle’s house and grab some printouts of eBay Coach purse auctions off the printer in the second-floor office. He said his phone was giving horrible reception, so he couldn’t call her back.

#3 When Meredith arrived at the house, she noticed the gate to the backyard was open, which was strange because the Youngs’ dog, Mr. Garrison, was allowed to roam free. She went to the back of the house where a door she thought might be open led into the garage.

#4 As Meredith climbed the stairs to the second floor, she saw red streaks in Cassidy’s bathroom to the right of the upstairs landing. There were red stains on the hallway carpeting and on the bed sheets.