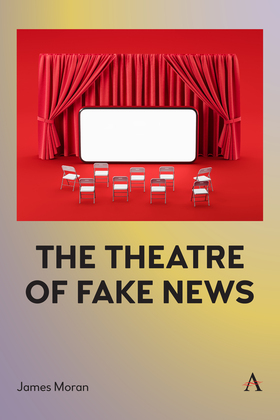 The Theatre of Fake News

by James Moran (Author)
Buy for $18.99 Excerpt
Fiction Drama Nonfiction Literary essays
warning_amber
One or more licenses for this book have been acquired by your organisation details

This book begins by defining the term ‘fake news’, a term which has come to great public prominence since the start of our current millennium. Fake news, broadly defined, is used to describe ‘false, often sensational, information disseminated under the guise of news reporting’. By giving some high-profile examples, this volume shows how the concept differs from lying and propaganda on one side and then from postmodern arguments about the relativism of all knowledge on the other. The book outlines the way that various national governments have become concerned with the concept in recent years, and points to contemporary worries about the behaviours of social media, about manipulation by both state and non-state actors, and about the developing technological capacity that allows almost any individual to produce ‘deep fakes’ that are virtually indistinguishable from genuine photographs or film footage.

The volume explains why fake news can be productively examined through the lens of theatre and performance. We see how various forms of theatre have shared the epistemic function of the news: that is, to furnish the public with reliable factual information, and the book includes discussion of theatre-makers who have attempted to use theatre in this way.

This book also traces the way that the concerns of our own historical moment about fake news echo the repeated worries expressed throughout theatrical history. The examples selected in this section of the book are therefore taken from the canonical high-road of Western theatrical texts, by figures such as Shakespeare, Bertolt Brecht, Henrik Ibsen, Lorraine Hansberry, Joan Littlewood, and Sarah Kane.