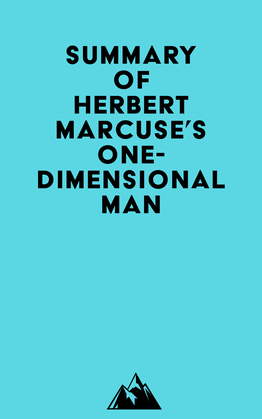 de   Everest Media (Autor)
Comprar por 3,99 $ Extracto
No Ficción Humanidades Filosofía
warning_amber
One or more licenses for this book have been acquired by your organisation details

#1 Douglas Kellner’s book One-Dimensional Man is a critical diagnosis of the present age, and it was immediately recognized as such by the New Left. It was written in the 1950s and early 1960s, and it reflects the stifling conformity of the era.

#2 Marcuse developed a critical, philosophical perspective from which he could criticize existing forms of thought, behavior, and social organization. He believed that dialectical philosophy could promote critical thinking.

#4 Marcuse was extremely eager to work on a book on dialectics with Horkheimer, who felt himself to be too involved in his work as director of the Institute to be able to devote sufficient time and energy to the project. They moved to California, where they had an opportunity to devote themselves full time to philosophical studies.