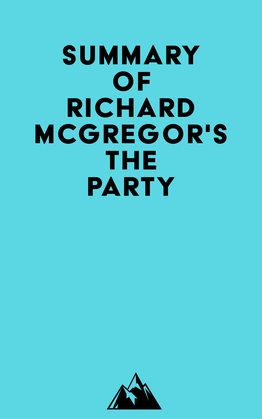 Summary of Richard McGregor's The Party

#1 At the 2007 Chinese Communist Party congress, which was held in Beijing, China, nine men were elected to lead the country for the next five years. The key thing was not how they walked on to the stage, but the order in which they appeared.

#2 The Chinese government maintains a national petitions office in the capital, where citizens can complain about official misconduct. Ahead of the party congress, Beijing threatened to mark down the careers of local leaders if residents from their cities made it to the capital to use this office.

#3 The Party has unveiled its new leadership, and by definition, the leadership of the government and the country, in the same way for decades. The leadership candidates had been locked in complex, private negotiations over the economy, political reform, and corruption for months beforehand.

#4 China’s president, Hu Jintao, and party secretary, Chen Ailian, were the two people I met while in China. Hu had immense power to set the parameters for government policy. He had attempted to fashion an imperial-era image for himself in his first five-year term, starting in 2002, as a sort of benevolent emperor.