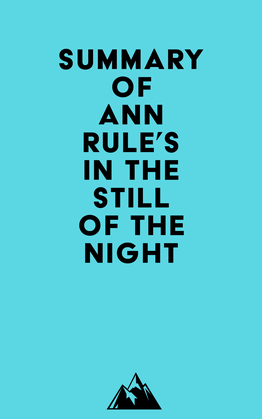 Summary of Ann Rule's In the Still of the Night

#1 The hearing was held in the Law and Justice Center in Chehalis. There were more media present than spectators. The waiting area was full of people, some appearing for their own trials, and some whose presence there I could not pinpoint.

#2 Everyone hopes for a warm and loving gathering of family and friends, but there is always a subliminal fear that someone we love could be in an accident on the way to Grandmother’s house for Thanksgiving or Christmas.

#3 Barb’s son, Freeman, was ten years younger than Ronda. Barb was very young when Ronda was born, only nineteen, and it probably was just as well that she had only her daughter to raise.

#4 Ronda wanted to be a Washington state trooper, and she almost was. She had many characteristics similar to her mother, who was also stubborn and single-minded. She wanted to marry and have children, and she almost achieved it all.