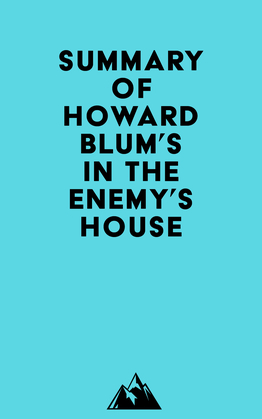 Summary of Howard Blum's In the Enemy's House

#1 Bob Lamphere had always felt that the FBI didn’t offer him what he wanted from the world. Its sensibility grated with all those rigid regulations, and the insistence on an even more intrusive personal conformity. He thought about leaving the FBI until the war ended.

#2 Bob was a preternaturally calm and unassuming presence, though he had his father’s temper. He loved reading, and he realized that books could be his path out of the mines. He set his sights on getting into college and earned both his law and bachelor’s degrees in five years.

#3 Bob was excited to begin his career in government, but he quickly realized that the FBI was looking for candidates. The Bureau saw timidity, but Bob saw a quiet confidence. He didn’t feel any need to bang any drums on his own behalf.

#4 Bob was the youngest person in his class at Quantico, the Marine base in Virginia where the FBI had its training center. He was extremely brash, and yet he was still extremely excited about his new job.