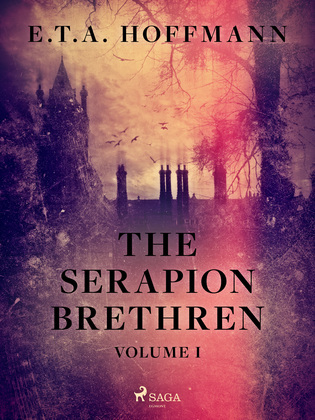 by E.T.A. Hoffmann (Author), Alexander Ewing (Translator)
Buy for $2.99 Excerpt
Fiction Classics Horror
warning_amber
One or more licenses for this book have been acquired by your organisation details

‘The Serapion Brethren’ is the name of a literary and social circle created in Berlin in 1818 by the German romantic writer E. T. A. Hoffmann and his friends. ‘The Serapion Brethren’ is also the name of a four-volume collection of Hoffmann's novellas and fairy tales that appeared in 1819, 1820, and 1821.
Volume 1 includes the stories: ‘The Story of Serapion’, ‘An Interrupted Cadence’, ‘The Poet and the Composer’, ‘A Fragment of the Lives of Three Friends’, ‘The Mines of Falun’, ‘Nutcracker and the King of Mice’, ‘The Doge and the Dogaressa’, ‘Master Martin, the Cooper, and his men’, ‘The Stranger Child’.
E.T.A. Hoffmann was a German romantic author, most famous for his novella ‘The Nutcracker and the Mouse King’ (1816) which inspired Tchaikovsky’s ballet ‘The Nutcracker’. These classic short stories are perfect for fans of horror and fantasy fiction and the authors H. P. Lovecraft and Neil Gaiman.

Ernst Theodor Wilhelm Hoffmann (1776-1822), better known as E. T. A. Hoffmann, was a German romantic author of fantasy and gothic horror. He was also a composer, music critic, draftsman and caricaturist.
Hoffmann's stories inspired several famous operatic composers, including Richard Wagner, Jacques Offenbach and Léo Delibes. He is also the author of the novella ‘The Nutcracker and the Mouse King’, on which Tchaikovsky’s famous ballet, ‘The Nutcracker’ is based. The story also inspired the film ‘The Nutcracker and the Four Realms’ (2018), starring Keira Knightley, Morgan Freeman, Helen Mirren.