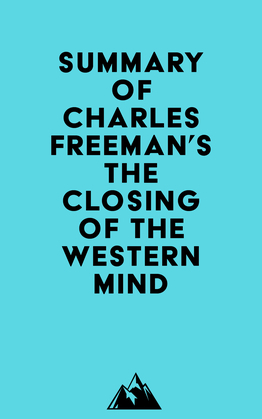 Summary of Charles Freeman's The Closing of the Western Mind

by   Everest Media (Author)
Buy for $3.99 Excerpt
Nonfiction History Ancient Rome
warning_amber
One or more licenses for this book have been acquired by your organisation details

#1 The fresco in the Carafa Chapel in Santa Maria Sopra Minerva, a Dominican church in Rome, is of the Dominican friar Thomas Aquinas. It shows him crushing a scowling old man beneath his feet, representing evil. The old man is a personification of evil, and he clutches a banner with the Latin inscription Wisdom conquers evil.

#2 The triumph of faith depicted in the fresco is a complex concept that involves trust in what cannot be seen, belief in promises made by God, and a declaration of loyalty or a virtue. It involves some sort of acquiescence in what cannot be proved by rational thought.

#3 The rise of faith over reason occurred in the fourth and fifth centuries A. D. The principles of empirical observation or logic were overruled in the conviction that all knowledge came from God. Yet it was Christianity that began to challenge a well-established and sophisticated tradition of scientific thinking.