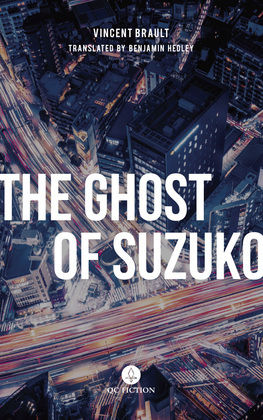 The Ghost of Suzuko

Vincent returns from Montreal to Tokyo, where his lover has passed away in tragic circumstances. So begins a sensual and disturbing tale of love and grief, of foxes, artists, and taxidermy, somewhere between the Sumida River, the Tsukiji fish market, and a contemporary art gallery.

Brault flirts with magical realism and ghostly Japanese tropes beneath the bright city lights, as Vincent loses his bearings to the Tokyo tremors and goes in search of the ghost of Suzuko.

Author: Vincent Brault was born in Montreal in 1978. He is the author of three novels: Le cadavre de Kowalski (2015), which was a finalist for the Prix des Rendez-vous du premier roman first novel award, La chair de Clémentine (2017), and Le fantôme de Suzuko (2021). The Ghost of Suzuko (Le fantôme de Suzuko) is his first novel to be translated into English. The French version of the novel was longlisted for the Prix des libraires du Québec, the Québec booksellers’ award.

Translator: Benjamin Hedley is a translator and bookseller from Montreal, Quebec. He has a B.A. from Concordia University in translation studies and has worked previously with QC Fiction on the short story collection I Never Talk About It. The Ghost of Suzuko is his first full-length translation.

“A superb novel on absence and losing one’s bearings, as well as an ode to passion and desire, this third book by Vincent Brault is a literary project like few others in Quebec . . . the borders between dreams and reality are ambiguous to say the least.” (Gabriel Guérin, Les Libraires magazine)

“a story as enchanting as it is exotic . . . The syncopated style lends the story a poetic dimension as the author shifts effortlessly from the dreamlike to the fantastic.” (Manon Dumais, Le Devoir newspaper)

“The back and forth between past and present weaves an effective narrative where love and grief intertwine with exquisite languor . . . A short, touching novel.” (Julie Roy, L’Actualité magazine)

“A hypnotising novel . . . Journey to the frontiers of the real and the supernatural, between Montreal and Japan.” (Marie-Lise Rousseau, Métro newspaper)