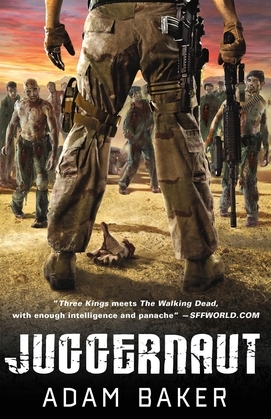 A brilliant, gripping portrait of survival in the face of complete annihilation.
THEY SEARCHED FOR GOLD. THEY FOUND DEATH.

Iraq 2005. Seven mercenaries hear an enticing rumor: somewhere, abandoned in the swirling desert sands, lies an abandoned Republican Guard convoy containing millions of pounds of Saddam's gold. They form an unlikely crew of battle-scarred privateers, killers and thieves, veterans of a dozen war zones, each of them anxious to make one last score before their luck runs out.

After liberating the sole surviving Guard member from US capture, the team makes their way to the ancient ruins where the convoy was last seen. Although all seems eerily quiet and deserted when they arrive, they soon find themselves caught in a desperate battle for their lives, confronted by greed, betrayal, and an army that won't stay dead.
An unputdownable military thriller that SFFworld.com called "Three Kings meets The Walking Dead," Juggernaut is a heart-pounding, fast-paced read that doesn't let up until the last page.