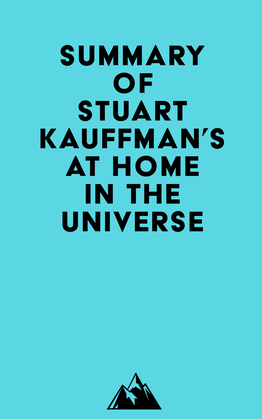 Summary of Stuart Kauffman's At Home in the Universe

by   Everest Media (Author)
Buy for $3.99 Excerpt
Nonfiction Science and technics Science Astronomy Cosmology
warning_amber
One or more licenses for this book have been acquired by your organisation details

#1 The Western mind has lost paradise, which was the first home of humanity. We have been told that purpose and value are ours alone to create, without Satan and God.

#2 The rise of science and the technological explosion has driven us to our secular worldview. We still have a spiritual hunger, however, and we must find anew our place in the universe.

#3 The story of our loss of paradise is familiar, but it is worth repeating. Until Copernicus, we believed ourselves to be at the center of the universe. But after Newton, the laws of mechanics not only derived tides and orbits, but unleashed on the Western mind a clockwork universe.

#4 The theory of evolution by natural selection, which Darwin introduced, shattered the belief that species are fixed by the squares of Linnean taxonomy. They evolve from one another. Natural selection acting on random variation, not God or some principle of Rational Morphology, accounts for the similarity of limb and fin.