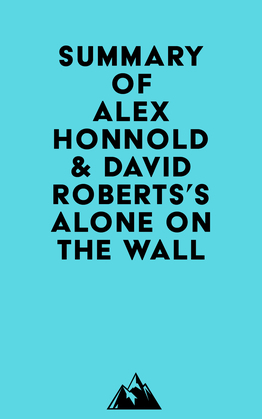 Summary of Alex Honnold & David Roberts's Alone on the Wall

by   Everest Media (Author)
Buy for $2.99 Excerpt
Nonfiction Nature, recreation and sports Sports & recreation Mountaineering
warning_amber
One or more licenses for this book have been acquired by your organisation details

#1 I was extremely nervous about climbing Moonlight Buttress. It was one of the hardest crack climbs in the world, and I was planning on free soloing it. The Rocker Blocker, a large ledge at the top of the third pitch, was something I was worried about breaking.

#2 I had planned to get an early start in order to beat the heat, but the water was freezing when I forded the Virgin River. I was wearing only shorts and a T-shirt, and my feet were still cold.

#3 In 2008, Alex Honnold was little known outside of his friends’ circle. Seven years later, at the age of thirty, he is probably the most famous climber in the world.

#4 Free soloing is the most extreme and dangerous form of climbing, and it has been done by only a handful of people. It consists of climbing without a rope or any hardware to attach yourself to the wall. It’s climbing at its purest.