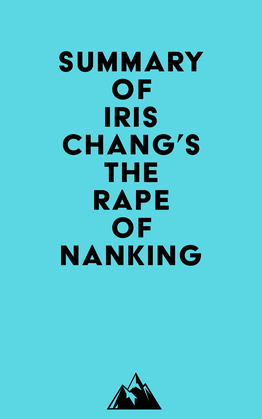 Summary of Iris Chang's The Rape Of Nanking

by   Everest Media (Author)
Buy for $2.99 Excerpt
Nonfiction History History by country Asia China
warning_amber
One or more licenses for this book have been acquired by your organisation details

#1 The Japanese identity was forged in a system in which social hierarchy was established and sustained through martial competition. The code of the samurai, which was followed by only a small percentage of the population, became the model of honorable behavior among all young men.

#2 Japan was isolated from the rest of the world, and this allowed its society to remain unchanged for many years. But in the nineteenth century, events beyond Japan’s control would knock the country out of its isolation, and it would have to change.

#3 The Tokugawa shogunate fell in the 1868 Meiji Revolution, which led to the establishment of the Meiji government and the adoption of the samurai ethic of bushido as the moral code for all citizens. The foreign threat acted as a further catharsis for the islands.

#4 The 1920s were a euphoric time for Japan, as the country had achieved great military victories and economic prosperity. But when the end of World War I halted the demand for military products, Japanese munitions factories were shut down and thousands of laborers were thrown out of work.