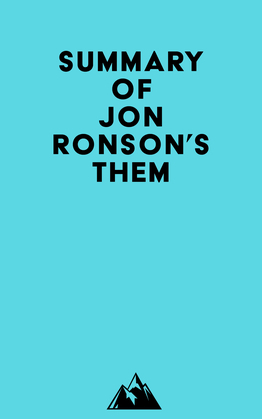 Summary of Jon Ronson's Them

by   Everest Media (Author)
Buy for $2.99 Excerpt
Nonfiction Social science Political science
warning_amber
One or more licenses for this book have been acquired by your organisation details

#1 I wanted to meet Omar Bakri and spend time with him while he attempted to overthrow democracy and transform Britain into an Islamic nation. I visited Yacob Zaki, a Muslim fundamentalist who often shared a platform with him.

#2 I met with Omar Bakri, who was going to help me understand the Muslim world. He told me that the media was full of anti-Muslim lies, and that I could help set the record straight.

#3 Omar was unlike my image of a Muslim extremist. He was friendly and polite, and his leaflets were not offensive. Still, his views were extreme. He had planned to distribute leaflets outside Holborn tube station entitled Homosexuality, Lesbianism, Adultery, Fornication and Bestiality: THE DEADLY DISEASES, but I gave him a ride instead.

#4 I met with Omar Bakri, the leader of the Finsbury Park Mosque, which was hosting a conference entitled Democracy or Dictatorship. Omar was speaking on behalf of dictatorship. He quoted from a letter he had just received from the Blind Sheikh, who was in jail for life in Missouri for inspiring the 1993 World Trade Center bombing.