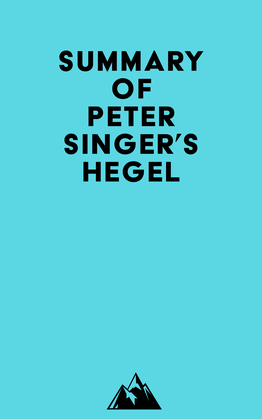 by   Everest Media (Author)
Buy for $2.99 Excerpt
Nonfiction Human science Philosophy History & surveys Modern
warning_amber
One or more licenses for this book have been acquired by your organisation details

#1 Hegel was a German philosopher who lived during the French Revolution. He was just short of his nineteenth birthday when the Revolution began, and he shared the enthusiasm of the period. When Napoleon ruled over Europe, Hegel praised him as a world genius who had been destroyed by mediocrity.

#2 Hegel was a German philosopher who lived during the golden age of German literature. He was a close friend of the poet Hölderlin, and a contemporary of the leaders of the German Romantic movement, including Novalis, Herder, Schleiermacher, and the Schlegel brothers.

#3 Kant’s work is considered one of the greatest philosophical works of all time. He established that our mind is not a passive receiver of information obtained by our eyes, ears, and other senses. Rather, our mind plays an active role in organizing and systematizing what we experience.

#4 After the publication of the Critique of Pure Reason, dissatisfaction began to be expressed with Kant’s philosophy. The first was his view of the thing-in-itself, which seemed to limit the powers of human reason. The second was his division of human nature, which seemed to imply that we are always divided between reason and passion.