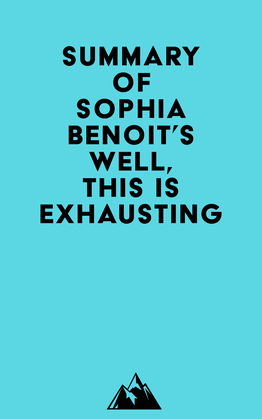 Summary of Sophia Benoit's Well, This Is Exhausting

by   Everest Media (Author)
Buy for $2.99 Excerpt
Nonfiction Biography & autobiography Women
warning_amber
One or more licenses for this book have been acquired by your organisation details

#1 I grew up in a household that was not prudish about sex, but I still got the message that sex was wrong because of the general silence and discomfort around the topic. I was fat, and in my mind, fat people were not allowed to be sexual.

#2 I grew up believing that I was not sexually desirable because I was fat. The media I was consuming only reinforced the belief that I needed to be thinner in order for someone to ever want me.

#4 I had a crush on almost everyone I saw from the time I was five years old. I was convinced that the zenith of human experience was someone being attracted to you. This belief caused me no problems whatsoever.