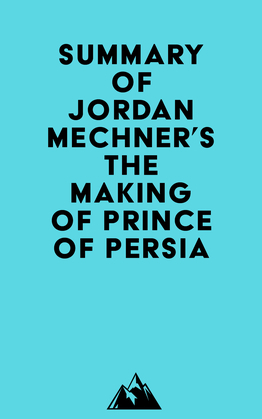 Summary of Jordan Mechner's The Making of Prince of Persia

by   Everest Media (Author)
Buy for $2.99 Excerpt
Nonfiction Computers Audio, vidéo Video
warning_amber
One or more licenses for this book have been acquired by your organisation details

#1 I had to replace the digitizer, which recognizes two shades: black and white. The background needs to be dark enough to be perceived as black even when the brightness is turned up high enough to make David’s arms and face and feet visible.

#2 The best way to do the digitizing for the game may be to shoot it in Super 8, put it on the Moviola, then train the video camera on the screen and feed it directly into the digitizer.

#3 The final version of the game was not as good as the Apple version. It was sluggish, had frequent disk accesses, and a few minor graphics glitches. I was surprised by how much the Apple version was able to improve the game.

#4 I decided to get actively involved in the game design process, and stay on in a supervisory capacity. This would allow me to keep some control over the project’s development, and justify asking for a higher royalty rate than if I weren’t involved at all.