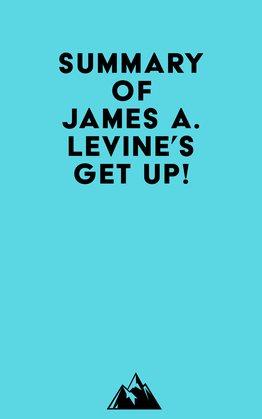 Summary of James A. Levine's Get Up!

#1 I had not had an uninterrupted night’s sleep for months because I was infatuated with Joanne. I was in Mr. Lewison’s 5M English class, and he was a boring teacher who never missed a chance to hit one of his students with a piece of chalk.

#2 I was infatuated with Joanne Lymnaeidae, a pond snail, at the age of 11. I would spend my allowance on buying pieces of glass and joining them together with silicone glue. I would attach Joanne or Maurice to the inside of the tank, and then mark the spot where they had moved to in the morning.

#4 I was interviewed to enter one of London’s most famous schools, St. Paul’s. I showed up with 217 three-foot pieces of parchment paper, each was the overnight pattern of movement from a single snail. The principal, Mr. Hyde, was interested in the education of his students, but he beat bad behavior out of them.