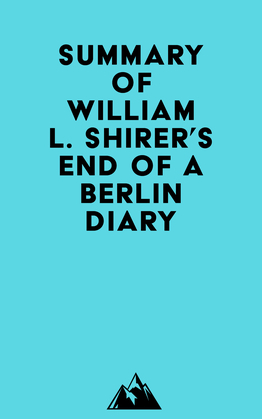 Summary of William L. Shirer's End of a Berlin Diary

#1 I was in London for the World Security Conference, which was held at Dumbarton Oaks mansion. The Russians and Americans had a wide divergence of opinion on the peace structure.

#2 Willkie died suddenly at noon. He had been ill, but his death came as a shock. He had been a good friend, and I had written him a joking note about his illness a few days before I left New York.

#3 I returned to Germany in November 1926, after the last great war of our time, to see how the country and the people were coping with the destruction of their city. They were a sorry specimen to behold.

#4 The citizens of Frankfurt were not pitiful specimens of humanity, but they were still willing to cheer Hitler and the Nazi cause. They had won them a great war.