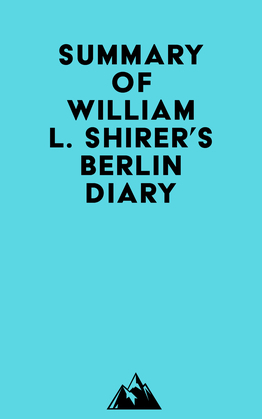 by   Everest Media (Author)
Buy for $2.99 Excerpt
Nonfiction Biography & autobiography Editors, journalists, publishers
warning_amber
One or more licenses for this book have been acquired by your organisation details

#1 We had the best, happiest, and uneventest year of our lives in 1933. We lived it as we dreamed and planned, beautifully independent of the rest of the world. It couldn’t have gone on for ever.

#2 We have spent the past twelve months doing nothing significant. We swam, hike, and read. We had time to know each other, to loaf, and to wine and eat. We saw the bull-fights in the afternoon and the Barrio Chino at night in Barcelona.

#3 The shooting continued until midnight, when the Mobile Guards began to get the upper hand. Several times, the Place de la Concorde changed hands, but the police were in control by midnight.

#4 The rioting last night was the result of the Stavisky scandal, but the swindles demonstrate the rottenness and weakness of French democracy. Daladier and his Minister of the Interior, Eugène Frot, gave the U. N. C. permission to demonstrate, and they should have refused it.