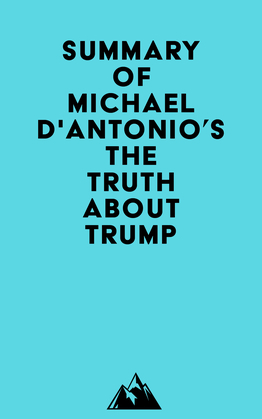 Summary of Michael D'Antonio's The Truth About Trump

by   Everest Media (Author)
Buy for $2.99 Excerpt
Nonfiction Biography & autobiography
warning_amber
One or more licenses for this book have been acquired by your organisation details

#1 On July 12, 1954, Trump was called to testify before a US Senate committee about $4 million in windfall profits he had taken from a government housing program for war veterans.

#2 Capehart, the Republican senator from Ohio, made the hearings into a traveling show that would tour the country and air live on TV. He subpoenaed Fred Trump, who gave a brilliant performance. He explained the complicated, but legal, means he used to get the most out of a program that seemed designed to benefit a builder who could read regulations as well as he could read a blueprint.

#3 Trump explained that the land under his Beach Haven development was held by a trust devoted to his children. The buildings, however, were owned by half a dozen corporations. Every year these six entities paid rent to the trust for the use of the land.

#4 Trump was a classic New York character, and he could have been drawn from a Gilded Age memoir of political corruption called Plunkitt of Tammany Hall. The Plunkitt in question was George Washington Plunkitt, a nineteenth-century New York State legislator who had famously declared, I saw my opportunities and I took ’em.