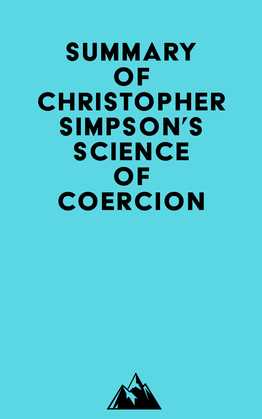 by   Everest Media (Author)
Buy for $2.99 Excerpt
Nonfiction Social science Political science
warning_amber
One or more licenses for this book have been acquired by your organisation details

#1 Psychological warfare is a small but interesting field in the social sciences. It underlies most college- and graduate-level training for print and broadcast journalists, public relations and advertising personnel, and the related craftspeople who might be called the ideological workers of contemporary American society.

#3 The links between federal research sponsorship and the evolution of academic preconceptions about communication and mass media are difficult to trace. However, it is clear that the focus on psychological warfare projects helped shape the broader structure of assumptions and received knowledge in the field.

#4 Psychological warfare is also used to extend the influence of the US government beyond its direct control. The CIA’s radio broadcasting into Eastern Europe became one of the cheapest, safest, and most effective tools of foreign policy.