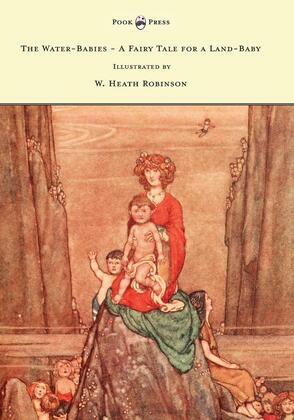 The Water-Babies - A Fairy Tale for a Land-Baby - Illustrated by W. Heath Robinson

Charles Kingsley’s classic, The Water Babies, was extremely popular in England, and was a mainstay of British children's literature for many decades. It tells the story of a young chimney sweep, Tom, who drowns in a river and is turned into a ‘water-baby’. Tom then embarks on a series of adventures and lessons underwater, and meets characters such as the major spiritual leaders of the water world, Mrs. Doasyouwouldbedoneby, Mrs. Bedonebyasyoudid, and Mother Carey.

This classic fairy tale, originally published in 1915, contains eight incredible colour illustrations and many beautiful and intricate black and white drawings by W. Heath Robinson. An English cartoonist and illustrator, best known for drawings of ridiculously complicated machines – for achieving deceptively simple objectives. Such was (and is) his fame, that the term ‘Heath Robinson’ entered the English language during the First World War, as a description of any unnecessarily complex and implausible contrivance.

Pook Press publishes rare and vintage Golden Age illustrated books, in high-quality colour editions, so that the masterful artwork and story-telling can continue to delight both young and old.