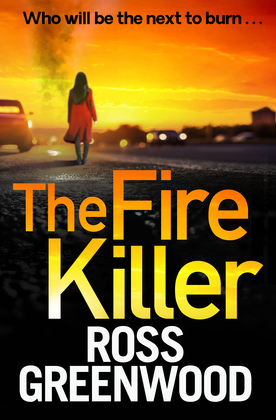 When DI Barton is asked to investigate a seemingly innocuous fire that kills, he believes it's either children fooling around or a worrying racially-motivated crime.

As he delves deeper into the case, he soon realises that there is a history of similar blazes spread out over many years, all within a close area. An idea suggested by pathologist Mortis makes Barton suspect he has the arsonist’s motives wrong.

When a night worker comes forward with a tip, Barton narrows down the suspects. But with all of them acting suspiciously, he knows for sure that one or more of them must be lying. And when a huge house blaze shocks everyone, Barton fears the killer has lost all control.

Who is The Fire Killer? What will be next to burn?

DI Barton is back as Ross Greenwood continues with his bestselling series, perfect for fans of Mark Billingham and Ian Rankin.

'Move over Rebus and Morse; a new entry has joined the list of great crime investigators in the form of Detective Inspector John Barton. A rich cast of characters and an explosive plot kept me turning the pages until the final dramatic twist.' author Richard Burke

‘Master of the psychological thriller genre Ross Greenwood once again proves his talent for creating engrossing and gritty novels that draw you right in and won’t let go until you’ve reached the shocking ending.’ Caroline Vincent at Bitsaboutbooks blog

'Ross Greenwood doesn’t write clichés. What he has written here is a fast-paced, action-filled puzzle with believable characters that's spiced with a lot of humour.' author Kath Middleton