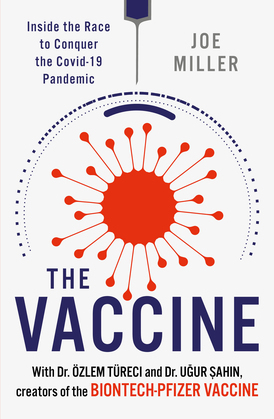 When the world stopped, all hopes rested on finding a vaccine. An unlikely team answered the call.

Before Covid-19 was even given its name, a select group of scientists in Germany, assembled by married couple and decades-long research partners Uğur Şahin and Özlem Türeci, began building 20 potential vaccines.

As the deadly disease spread from country to country, what followed was a desperate race against time to conduct rigorous tests and clinical trials, whilst navigating political interference and seeking the support of the pharmaceutical industry.

Shedding a light on the science behind the breakthrough, The Vaccine tells the story of the trailblazers who led the fightback against Covid-19, whose discoveries could now help the world tackle cancer, along with many other pervasive diseases. It draws back the curtain on one of the most important medical achievements of our age, containing contributions from the fascinating couple themselves, as well as more than 60 scientists, politicians, public health officials, and BioNTech staff.

More suspenseful than a novel, this is a real-life story of an extraordinary race against time to save the world.