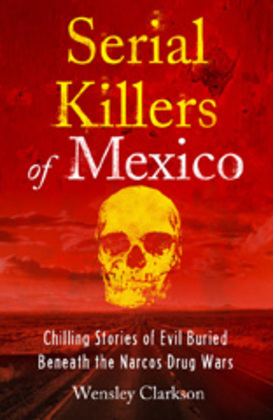 Chilling Stories of Evil Buried Beneath the Narco Drug Wars
by Wensley Clarkson (Author)
Buy for $9.99 Excerpt
Nonfiction Social science Criminology News and investigations True crime
warning_amber
One or more licenses for this book have been acquired by your organisation details

A collection of chilling stories of murders from Mexico, one of the world's most prolific hunting grounds for serial killers.

'If I was a serial killer looking for new victims, I'd head over the border to Mexico because life is cheap there and the police have got so much other sh*t to investigate, they don't bother with random killings.' - A former FBI agent

For decades, America has been considered to be the natural home of serial killers. Infamous names like Ted Bundy or Jeffrey Dahmer are internationally known and feared, and rightly so. But what if, just south of the border, there was a far more active network of serial killers? What if the perfect storm of crime, fuelled by this nation's deadly narco wars, has turned Mexico into an ideal hunting ground for many of the most bizarre and blood thirsty serial killers the world has ever seen?

Serial Killers of Mexico delves into this criminal underbelly to tell the stories of the psychopathic loners, professional narco assassins and the overwhelmed law enforcement trying desperately to hunt them down.