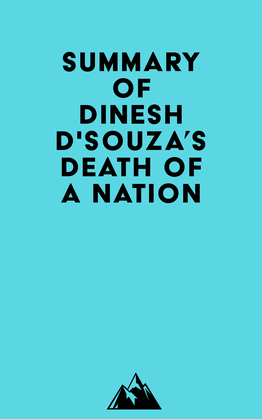 Summary of Dinesh D'Souza's Death of a Nation

#1 On July 6, 2017, Trump addressed the death of America in an address to the Polish people in Warsaw’s Krasinski Square. He spoke not of America, but of Western civilization, and stated that the West does not stand alone against its enemies.

#2 Trump’s supporters consider him to be the serial killer of America’s most cherished values and institutions. He and his followers threaten the survival of the West by promoting religious and racial exclusivity.

#3 The whole manic resistance to Trump is widespread and genuine. Many people are convinced that Trump poses a fundamental danger to America’s survival as a diverse, open, and lawful democratic society.

#4 Trump is a racist and a white supremacist, and his voters are as well. Trump’s supporters are willing to restore whiteness to its former status as a marker of national identity, and they are willing to kill small children attending Sunday school, according to progressive novelist and Nobel laureate Toni Morrison.