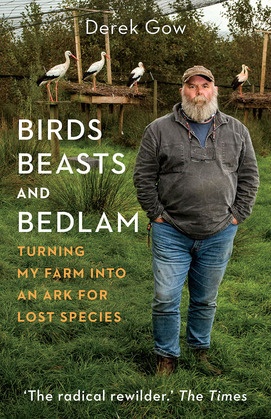 "Gow has a fire in his belly. We need more like him."—BBC Wildlife magazine

"[Gow is] a wonderful storyteller, wisely allowing his animals (and considerable bedlam) to take center stage. His stories can be bawdy, laugh-out-loud funny, poignant, or even depressing, but they're never dull."—Booklist

Birds, Beasts and Bedlam recounts the adventures of farmer-turned-rewilder Derek Gow, who is saving Britain’s much-loved but dangerously threatened species, from the water vole to beaver, wildcat to white stork, and tree frog to glow worm.

Derek tells us all about the realities of rewilding; how he reared delicate roe deer and a sofa-loving wild boar piglet, moved a raging bison bull across the country, got bitten by a Scottish wildcat, returned honking skeins of graylag geese to the land and water that was once theirs, and restored the white stork to the Knepp Estate with Charlie Burrell and Isabella Tree.

Derek’s first book, Bringing Back the Beaver, was a riotously funny and subversive account of his single-handed reintroduction of the beaver in Britain. Birds, Beasts and Bedlam, a natural successor to Gerald Durrell’s A Zoo in My Luggage, tells the story of Derek’s rewilding journey and his work to save many more species by transforming his Devon farm into a wildlife breeding center. He now houses beavers, white storks, water voles, lynx, wildcats, and harvest mice, with the aim of releasing them into the wild one day.

Tearing down fences literally and metaphorically, Derek Gow is the one person with the character and strength of will to defy authority, bend the rules—and save our wildlife.

"Gow reinvents what it means to be a guardian of the countryside."—The Guardian

"Derek Gow wants his farm to be a breeding colony, a seedbed for a denuded island."—The New Yorker