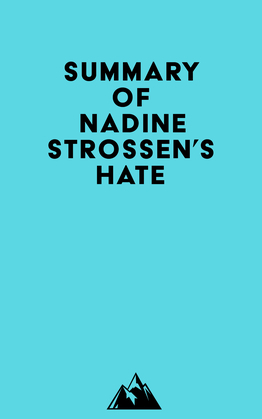 by   Everest Media (Author)
Buy for $2.99 Excerpt
Nonfiction Law Privacy Civil rights
warning_amber
One or more licenses for this book have been acquired by your organisation details

#1 The term hate speech is used to describe a wide variety of controversial speech. It is typically used to condemn and silence expressions that the attackers dislike and want to suppress.

#2 Despite the varying definitions that have been adopted in hate speech laws, they all share two fundamental First Amendment flaws: they violate the cardinal viewpoint neutrality and emergency principles by permitting government to suppress speech solely because its message is disfavored, disturbing, or feared, and not because it directly causes imminent serious harm.

#3 However, some major proponents of hate speech laws have suggested that the laws should only be enforced against groups that have historically been subject to discrimination. This approach blatantly violates both free speech and equality principles.

#4 The equal rights movement has always depended on robust freedom of speech, particularly the viewpoint neutrality and emergency principles, which shelter the egalitarian ideas that many have considered harmful, hateful, and dangerous.