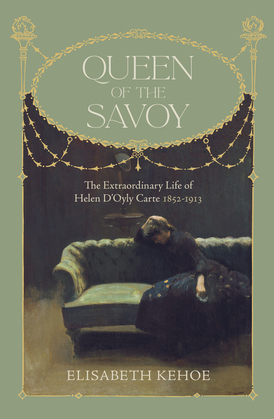 Queen of The Savoy

The Extraordinary Life of Helen D’Oyly Carte 1852-1913
by Elisabeth Kehoe (Author)
Buy for $18.99 Excerpt
Nonfiction Arts Painting
warning_amber
One or more licenses for this book have been acquired by your organisation details

Born in 1852 in a small coastal town in Scotland, Helen D’Oyly Carte, through academic brilliance and an incredible talent for ‘managing chaos’, developed and ran the world’s foremost top entertainment and hospitality organisation with her husband, Richard D’Oyly Carte (known as D’Oyly). By the age of 30, she was running five Gilbert & Sullivan companies for the Savoy Group in the United States, crossing the Atlantic thirty times, and for the next three decades she ran the Savoy Theatre, the Savoy Hotel, Claridges and Simpson's-in-the-Strand. She was the only one trusted by the prickly, brilliant William Gilbert and Arthur Sullivan, to keep them from breaking apart, as they so regularly wanted to do. From a conventional upbringing, she chose to remain in London after the emigration of her family to Australia, first as an actress, then working alongside D’Oyly – she took over the reins as he became ill in the late 1880s. Until her death in 1913, she flourished and was famous, interviewed and admired, in a competitive, vibrant London that was the centre of world power and commerce. Queen of The Savoy charts Helen’s course from Wigtown to the West End, where running a company with hundreds of employees, led to her fame and fortune. The artists Whistler and Sickert were friends and immortalised her in portraits. She was known in her time as the true founder of the Gilbert and Sullivan franchise and this biography will bring to light, some 110 years after her death, the extraordinary role that she played in one of Britain’s greatest success stories.