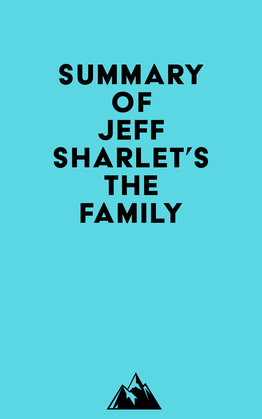 Summary of Jeff Sharlet's The Family

#1 Zeke was a man who had been called to witness the ruins of secularism in New York. He went around talking to people he took to be Muslims, praying with an imam, and visiting mosques. He got as close to Ground Zero as possible.

#2 When he met Jesus, he stopped struggling and his pallor left him. He took a job in finance and he met a woman as bright as he was and much happier, but the questions of his youth still bothered him. He drank too much and his eye wandered.

#3 I had never thought of myself as a religious seeker, but at Ivanwald I became one. I had lived with Cowboy Christians in Texas, and with Baba lovers, America’s most benign cultists, in South Carolina.

#4 The Family is an invisible association that has always been organized around public men. They are known to have helped elect Senator Sam Brownback of Kansas, who is chair of the Values Action Team, and Representative Joe Pitts of Pennsylvania, who chairs the House version of the VAT.