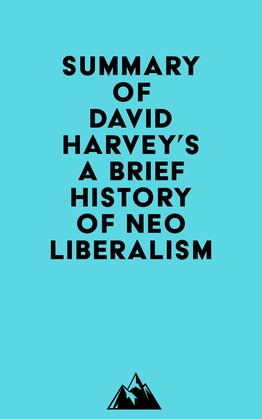 Summary of David Harvey's A Brief History of Neoliberalism

#1 The idea of freedom, long embedded in the American tradition, has played a prominent role in American politics in recent years. President Bush stated that the freedom conferred on Iraq was an adequate justification for the war, though he didn’t explain where the Iraqis were supposed to ride the horse of freedom.

#2 The Bush administration’s answer to the question of how to improve the well-being of the Iraqi people was to impose a neoliberal state on them. This state would facilitate the well-being of private property owners and businesses.

#3 The first experiment with neoliberal state formation took place in Chile after the coup on the little September 11th of 1973, which was promoted by domestic business elites threatened by Salvador Allende’s drive towards socialism.

#4 The Chilean economy was rebuilt following the coup d’etat led by General Pinochet in 1973. The country’s economists were brought into the government, and they applied free-market policies. The result was a much more pragmatic and less ideologically driven application of neoliberal policies in the years that followed.