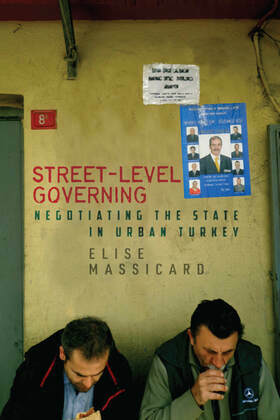 Negotiating the State in Urban Turkey
by Elise Massicard (Author)
Buy for $32.00 Excerpt
Nonfiction Social science Political science Comparatif History History by country Middle East Turkey & Ottoman empire
warning_amber
One or more licenses for this book have been acquired by your organisation details

Muhtars, the lowest level elected political position in Turkey, hold an ambiguously defined place within the administrative hierarchy. They are public officials, but local citizens do not always associate them with the central government. Street-Level Governing is the first book to investigate how muhtars carry out their role—not only what they are supposed to do, but how they actually operate—to provide an ethnographic study of the state as viewed from its margins. It starts from the premise that the seeming "margin" of state administration is not peripheral at all, but instructive as to how it functions.

As Elise Massicard shows, muhtars exist at the intersection of everyday life and the exercise of power. Their position offers a personalized point of contact between citizens and state institutions, enabling close oversight of the citizenry, yet simultaneously projecting the sense of an accessible state to individuals. Challenging common theories of the state, Massicard outlines how the position of the muhtar throws into question an assumed dichotomy between domination and social resistance, and suggests that considerations of circumvention and accommodation are normal attributes of state-society functioning.