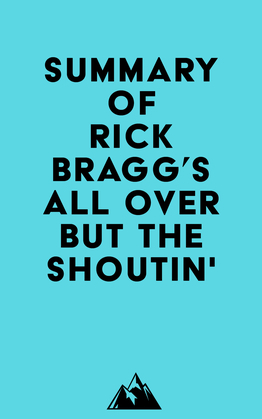 Summary of Rick Bragg's All Over but the Shoutin'

de   Everest Media (Autor)
Comprar por 3,99 $ Extracto
No Ficción Biografía y autobiografía Editores, periodistas
warning_amber
One or more licenses for this book have been acquired by your organisation details

#1 My parents were born in the foothills of the Appalachian Mountains in Georgia, a place where gray mists hid the tops of low, deep-green mountains. It was a place where redbone and bluetick hounds flashed through the pines as they chased possums into the sacks of old men in frayed overalls.

#2 The religion held even though the piano players went to music school and learned to read notes, and even though new churches became glass and steel monstrosities that looked like they had just touched down from Venus. It held even though the more prosperous preachers started to tack the pretentious title of Doctor in front of their name.

#3 I had never been inside a church in my life until I was a father, until I needed The Cross. I would ask to see my momma in some of those calls, but anything she had for me had been beaten and starved out of her a long time ago.

#4 I was 16 when I went to see my father. I was not afraid of him anymore. I was not helpless anymore, not some child hiding under the bed. I was a lot like him, he had told me.