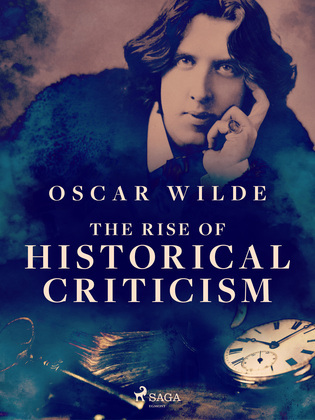 The Rise of Historical Criticism

by Oscar Wilde (Author)
Buy for $2.99 Excerpt
Nonfiction Arts Painting Biography & autobiography
warning_amber
One or more licenses for this book have been acquired by your organisation details

One of Wilde’s first published pieces, ‘The Rise of Historical Criticism’ is an essay, written while he was a student at Oxford, during the 1870s. In it, he dissects the notions of historical and literary criticism.

His belief that criticism is a form of revolt and, with an associated action, can engender revolution and promote democracy, has been the subject of debate between academics for years. In addition, Wilde finds a platform on which to discuss the purpose of true Art.

Often funny and eternally fascinating, ‘The Rise of Historical Criticism’ is a crucial read for any fans of the acid-tongued author.


Oscar Wilde (1854 – 1900) was an Irish novelist, poet, playwright, and wit. He was an advocate of the Aesthetic movement, which extolled the virtues of art for the sake of art. During his career, Wilde wrote nine plays, including ‘The Importance of Being Earnest,’ ‘Lady Windermere’s Fan,’ and ‘A Woman of No Importance,’ many of which are still performed today. His only novel, ‘The Picture of Dorian Gray’ was adapted for the silver screen, in the film, ‘Dorian Gray,’ starring Ben Barnes and Colin Firth. In addition, Wilde wrote 43 poems, and seven essays. His life was the subject of a film, starring Stephen Fry.