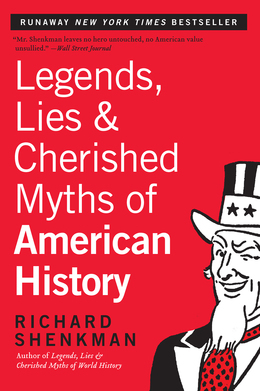 The truth and nothing but the truth—Richard Shenkman sheds light on America's most believed legends.

The story of Columbus discovering the world was round was invented by Washington Irving.

In Concord, Massachusetts, a third of all babies born in the twenty years before the Revolution were conceived out of wedlock.

Washington may have never told a lie, but he loved to drink and dance, and he fell in love with his best friend's wife.

There's no evidence that anyone died in a frontier shootout at high noon.

After World War II, the U.S. government concluded that Japan would have surrendered within months, even if we had not bombed Hiroshima and Nagasaki.