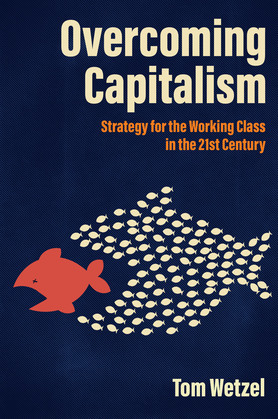 Strategy for the Working Class in the 21st Century
by Tom Wetzel (Author)
Buy for $21.99 Excerpt
Nonfiction Business & economics Labor Social science Political science Labor & industrial relations Political ideologies Anarchism Sociology
warning_amber
One or more licenses for this book have been acquired by your organisation details

Overcoming Capitalism is a book about strategy, particularly how the powerless can get the upper hand. And it’s written for everyone—not a specialized, self-selected audience. Tom Wetzel carefully explains how capitalism works and how the structure is stacked against us with an eye toward where power lies and how we can tip the scales.

The book is a twenty-first century reworking of the approach to unionism. The United States has a dramatic history of workers organizing on the job. In the last 70-odd years labor organizations have made peace with owners, and wages, various protections, and safety has diminished. All during an era that, despite its ups and downs, has been extremely profitable for the ownership class. Wetzel provides a solution to that failure by showing how a democratic outcome can be built into the method of struggle for social change, giving working people the means to ensure they will end up in control of the labor process and the larger society.
But this isn’t the old white guy in a hard hat unionism of the previous century. The working class has changed. Life under capitalism has changed. How we think about unionism must also change.

While the political and capitalist class wring their hands over the environmental crisis and economic inequality we can see the immediate appeal of a union movement with an expanded mission to wrest control from the wealthy and powerful before they cost-shift us into extinction.