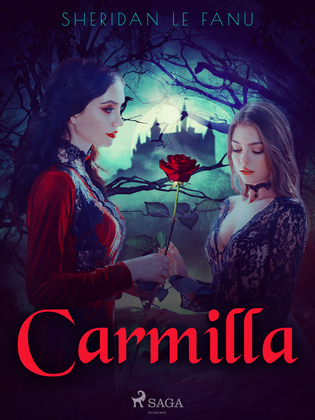 by Sheridan Le Fanu (Author)
Buy for $6.99 Excerpt
Fiction Classics Occult & supernatural Supernatural creatures Ghost
warning_amber
One or more licenses for this book have been acquired by your organisation details

Laura lives an isolated life with her father, alone in a castle in the Austrian wilderness. When the mysterious Carmilla, a strange and beautiful lady, arrives in the night, no one suspects the supernatural occurrences that follow. But still more unsuspected is the tempestuous romance that blooms between the two young women, and Carmilla’s nightmarish secret.

Written 26 years before Stoker’s ‘Dracula’, ‘Carmilla’ is the original vampire novel. Sheridan Le Fanu combines a chilling Gothic atmosphere with horrifying episodes, boldly exploring the sexual desires of his heroines, and establishing the image of the female vampire. ‘Carmilla’ is an essential read for all fans of gothic novels and vampires, from Anne Rice’s ‘Interview with the Vampire’ to Netflix’s ‘The Vampire Diaries’.

Joseph Thomas Sheridan Le Fanu (1814-1873) was an Irish Gothic writer of short stories and novels. One of the central names amidst the ghost-story writers of the 19th century, Le Fanu’s influence cannot be underestimated. Inspiring the likes of Bram Stoker, Le Fanu laid the basis for the Victorian Horror genre by combining realism with deeper psychological elements. His most important works include ‘Uncle Silas’, ‘Carmilla’, ‘The House by the Churchyard’, and his short story collection ‘In a Glass Darkly’.