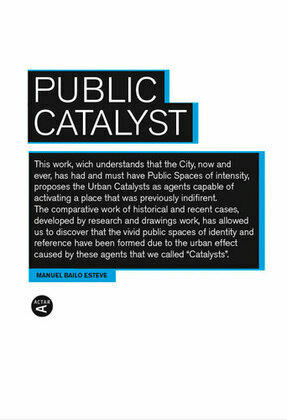 Demonstrates the existence of public space catalysts, as well as the need for their presence for an expectant or indifferent place to be activated.

This work -- which understands that the city, now and always, has had and must have public spaces of intensity -- proposes urban catalysts as agents that are capable of activating a place that was previously indifferent.

The comparative work of historical and recent cases, developed by research and drawings, has allowed us to discover that the vivid public spaces of identity and reference have been formed due to the urban effect caused by these agents that we call "catalysts." Manuel Bailo's work includes a wide range of projects, ranging from urban scale to interiorism. It has been widely published and presented with awards.

Co-published with University of Virginia: School of Architecture.