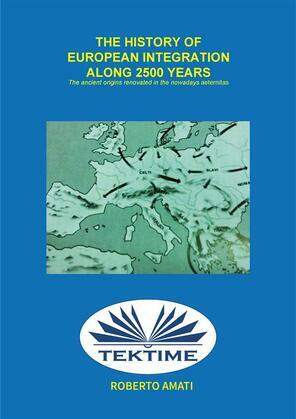 History Of European Integration In 2500 Years

by Roberto Amati (Author)
Buy for €7.99 Excerpt
Nonfiction History Other Essays History by country Europe
warning_amber
One or more licenses for this book have been acquired by your organisation details

The history of European integration did not begin in the aftermath of the 20th century AD: only the epilogue of a very long political, religious and socio-cultural formation process that started with the great adventure of Alexander the Great and his impromptu universal empire. In the centuries that followed, Europe became a land of immigration of peoples of Asian origin and Indo-European matrix, who found themselves on a continent that had emerged from the ice and occupied their own 'living space'. People still essentially present today who recognise themselves in Europe as an entity that retains its own characteristic identity in political, religious and historical-cultural terms. This book tells the story of the forces and ideas that enabled different 'gentes' to integrate and live together through facts, characters, thoughts, faiths, royal dynasties and power struggles.

The text is conceived with a plural thematic structure that aims to reflect the various European 'souls' and offer each specific interpretation. The Introduction sets out principles, concepts, questions, but also the philosophical/cultural paths along which the overall European culture was formed, even if not entirely homogeneous and for long periods dramatically conflicting, highlighting the turning milestones of the common continental thought thanks to an oriental and classical philosophical discourse. Part One, on the other hand, recounts the history of European events, personalities and evolutionary lines, with a Greek historical approach, relating them to the action and function of the Empire (especially the Christian one), which over the centuries 'attracted' the various peoples settled in Europe and trained them in a model of civilisation and socio-political organisation still visible today in every corner of the continent: the formation of the European states and nations now included in the EU is thus the product of the 'budding' of the Empire over two thousand years. Part Two examines the evolution of European legal and political thought using the method of Roman jurist treatises, following the development of the function of auctoritas, from its first configuration in the ancient Res Publica of Rome through the medieval, renaissance and modern eras to demonstrate the continuity of its conceptual reworking in every political and legal form of power established at every latitude of Europe, up to the so-called 'modern states' of today's democratic and constitutional republics. Part Three is a synthesis of the history of Christianity, from the events of the first 'communities' formed in the imperial age and then spread to the whole of Europe thanks to the evangelical action of the missionary monks and the policy of Christianization of the peoples of Europe conducted by the Empire and the institutional Church, under the sign of the biblical eschatological vision of 'salvation for all believers in Christ' which has an evident Jewish matrix and draws strength from the unique figure in human history of Jesus of Nazareth.