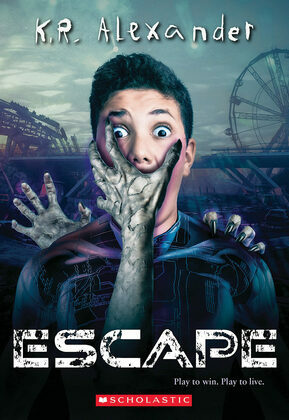 by K. R. Alexander (Author)
Buy for $6.99 Excerpt
Fiction Juvenile & young adult Action & adventure Themes Social situations Friendship Survival stories
warning_amber
One or more licenses for this book have been acquired by your organisation details
WESTWORLD meets CHARLIE AND THE CHOCOLATE FACTORY meets JURASSIC PARK, as kids win a chance to enter the place of their dreams -- and find that it quickly turns into a nightmare.

It's all anyone talks about, and it's all Cody dreams about. It's the biggest adventure park in the world, and it's more than mere rides and rollercoasters: At ESCAPE, you can do anything you want, be anyone you want, and there are no adults to tell you no.

Cody's a nobody, but for some reason he receives an invitation and the opportunity of a lifetime. At first, it's the most fun he's ever had. But after a few days, everything in the park starts to go haywire. One at a time, rides malfunction. Simulations turn deadly. His fantasy world glitches, and the games become races for survival. A voice comes over the intercoms, then-ESCAPE was never a theme park for the rich and famous. It was a place for punishment. They have less than a week to escape from the park before it floods. Only five kids will be allowed to leave.

It started out as a fight to get to the coolest rides. Now, they have to fight to survive.