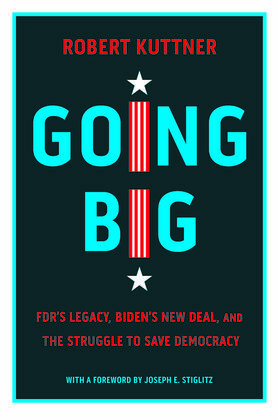 Bestselling Author: Obama’s Challenge, published at the outset of Obama’s presidency, sold over 20,000 copies in all editions. This new book is directly analogous.

Media track record: All of Kuttner’s books have received national review attention in the major outlets, including the New York Times, Wall Street Journal, the Washington Post, and everywhere else.

Platform: Kuttner is a regular weekly contributor to The American Prospect, and publishes frequently in the New York Review of Books, the New York Times, Boston Globe, Washington Post, and many other publications. He is a sought-after speaker and makes regular media appearances as an expert on American politics.

Political season opportunity: Publication is scheduled in the lead-up to the 2022 mid-term elections, which will be a referendum on Biden’s early successes; book speaks directly to this moment and to what is at stake.

Blurbs/endorsement: Previous books included endorsements from Joseph Stiglitz, Elizabeth Warren, Arlie Hochschild, Robert Putnam and many others; we will secure an A-list slate for this book.