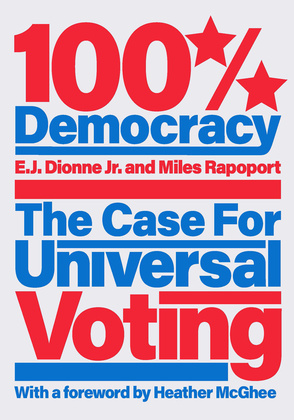 Timely: Americans have never been more interested in elections: From eliminating the electoral college to early and mail-in voting, felon enfranchisement, faithless electors, and Russian interference, the topic continues to be front and center.

Radical Idea: The idea of requiring everyone to vote is not currently on the table and should be. This will get a lot of attention. There is no trade book on the topic available, with a forthcoming Oxford University Press book by Shane P. Singh, titled Beyond Turnout: How Compulsory Voting Shapes Citizens and Political Parties, is the only new academic offering.

Sales Track: Dionne is the best-selling author of One Nation After Trump: A Guide for the Perplexed, the Disillusioned, the Desperate, and the Not-Yet Deported (2017), with Norman J. Ornstein and Thomas E. Mann, which sold over 20,000 copies and was named one of the Washington Post’s Best Books of the Year. Both Why the Right Went Wrong (2016) and Our Divided Political Heart (2012) sold over 10,000 copies. Dionne also co-authored We Are the Change We Seek: The Speeches of Barack Obama with Joy-Ann Reid (2017), which sold over 20,000 copies.

Platform: Dionne has a regular column in the Washington Post; Rapoport writes op-eds for a wide range of places, including The American Prospect, Common Dreams, and Huff Post. Between them, they have extensive networks (Rapoport is the former head of Common Cause and Demos), all of whom will take up this issue.