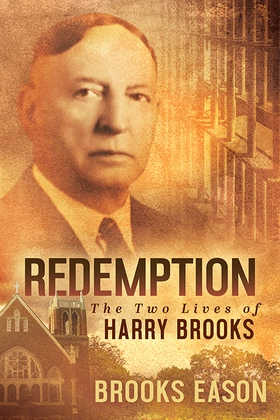 Redemption: The Two Lives of Harry Brooks is a work of historical fiction based on the life of Brooks Eason’s grandfather.

In the first half of Harry’s life, he embezzled money from the Uniontown, PA, school district where he was the elected superintendent, left his wife for another woman, and sought to escape by booking passage on a Cunard liner to Liverpool. But his plan was foiled, Scotland Yard arrested him when the ship docked, and he was extradited, tried, convicted, and served three years in Western Penitentiary in Pittsburgh. In the second half of Harry’s life, he came to the South, where he spent his last thirty-five years as a revered and successful Methodist minister and church official. He was a district superintendent overseeing a hundred congregations at the time of his death in 1942. In 1934, when President Roosevelt spoke to a crowd of 75,000 in North Mississippi, Harry was chosen to give the invocation. Nobody in the huge crown knew the preacher at the lectern was an ex-con.

Redemption: The Two Lives of Harry Brooks entertains readers with a fascinating story and uses Harry’s life to illustrate important principles of theology, principally that all men are sinners but that even the worst of sinners are capable of redemption. It is unique and appealing because it’s based on a true story of a man who could have given up when he lost everything, but instead he persevered. Redemption: The Two Lives of Harry Brooks appeals to audiences who are interested in an inspiring story of overcoming hardship.
Format
EPUB
Protection
Avec DRM
Date de publication
1 mars 2022
Éditeur
Morgan James Fiction
ISBN
9781631957499
Taille du fichier
2 Mo