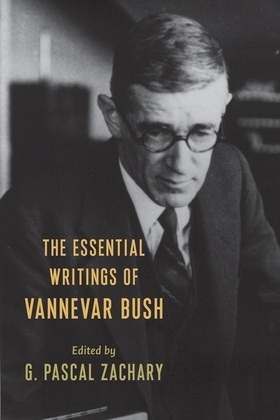 The Essential Writings of Vannevar Bush

The influence of Vannevar Bush on the history and institutions of twentieth-century American science and technology is staggeringly vast. As a leading figure in the creation of the National Science Foundation, the organizer of the Manhattan Project, and an adviser to Presidents Roosevelt and Truman during and after World War II, he played an indispensable role in the mobilization of scientific innovation for a changing world. A polymath, Bush was a cofounder of Raytheon, a pioneer of computing technology, and a visionary who foresaw the personal computer and might have coined the term “web.”

Edited by Bush’s biographer, G. Pascal Zachary, this collection presents more than fifty of Bush’s most important works across four decades. His subjects are as varied as his professional pursuits. Here are his thoughts on the management of innovation, the politics of science, research and national security, technology in public life, and the relationship of scientific advancement to human flourishing. It includes his landmark introduction to Science, the Endless Frontier, the blueprint for how government should support research and development, and much more. The works are as illuminating as they are prescient, from considerations of civil-military relations and the perils of the nuclear arms race to future encyclopedias and information overload, the Apollo program, and computing and consciousness. Together, these pieces reveal Bush as a major figure in the history of science, computerization, and technological development and a prophet of the information age.